KFD in the Community

The Knollwood Volunteer Fire Department is a vital organization to the Knollwood community the members dutifully serve. Founded for the community by community members, the department was shaped by early members and their families. Evolving beside its equipment, the vehicles of Knollwood Fire illustrated the development and cohesion of the community and the department. Traditions evolved as the department grew, rivalries among other fire departments erupted, and scores were settled during the annual Lake County Fire Conventions.

Emerging as a small, grassroots organization, the Knollwood Volunteer Fire Department had little community interaction outside its response to emergencies. This initially isolated group of individuals, seeing little community support when first proposing an $8,000 tax levy to erect a fire station, was welcomed with empty pockets. Recognizing the necessity of community involvement, the department transformed its public image from being just a fire department to being Knollwood’s fire department. 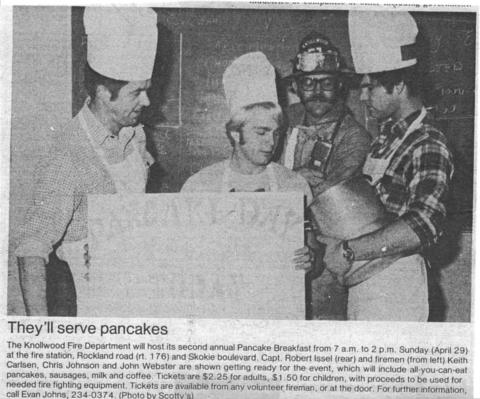 The transition was not simple; it included community involvement beyond the traditional role of firefighting. The new job description for Knollwood firefighters included service calls from relighting stove and furnace pilot lights to pumping water from flooded basements and changing batteries in smoke detectors. Their role expanded throughout the community to include flooding the park during winter months for families to skate. This new relationship appealed to residents and increased their willingness to support their newly redefined fire department. The second tax levy referendum was passed one year later; the simple transformation to a community fire department was only the first example of how the community would help shape the department and its future.

Evolving as the unofficial community center of Knollwood, the fire house was host to local Boy and Girl Scout troops. Convening at the station weekly, the troops often showed their appreciation by baking treats for the firefighters. On several occasions the Boy Scouts would sleep at the station prior to leaving on a camping trip if the destination was far and an early departure was necessary. The department became the nerve center of the community. Department members expanded their generosity during the holidays and began a new tradition around Knollwood for families of all ages to enjoy. Parading around the streets of Knollwood, Santa would tour the town standing proud and tall atop the touring fire engine, inviting one and all to visit the fire station. The station was decorated for the holidays, and children would greet Santa beside the Christmas tree, play on the fire trucks, and finally depart with a goody bag from Santa. The gathering was another opportunity for KFD to return its support and gratitude to the community that unselfishly gives throughout the year.

Another tradition within Knollwood is the annual Pancake Day, a full morning of all-you-can-eat pancakes, sausage links, and juice. This event has been a Knollwood Fire tradition for over 25 years and is among the most supported events in the Knollwood community. Functioning as the primary fundraiser for the fire department, the annual Pancake Day is an opportunity for residents of Knollwood to visit their local fire house and meet the firefighters who respond to their emergencies - and cook some pretty good pancakes.